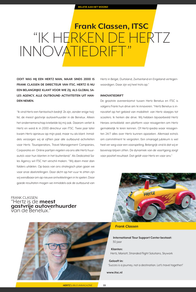 ITSC in the news with Hertz Netherlands celebrating 55 years

Hertz Netherlands is celebrating its 55th Anniversary this year. Frank Classen, owner of ITSC was interviewed for the publication of the Special Anniversary Magazine.

Frank has been part of the commercial team of Hertz Netherlands in the past hence it was great to welcome Hertz Rent A Car on board of ITSC back in 2002. ITSC is managing the outbound business for Hertz, Dollar and Thrifty out of the Netherlands, Belgium, Luxembourg, Germany, Switzerland and the United Kingdom.

The relationship is strong, dynamic and succesful so we raise our glass to Henk van den Helder and his team and wish them lots of success for the years ahead!

You will find the article on page 33 of the magazine which can be found here.